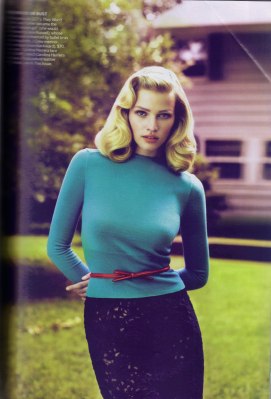 If any of you read the September issue of Vogue (which I am undoubtedly sure that you did), you noticed the entire editorial devoted to sweaters, and specifically a very retro take on sweaters. This particular page caught my interest because this sweater is actually a cardigan worn backwards (J.Crew’s merino-wool cardigan to be specific). I thought that was so creative, and I can’t wait to try it myself it with a pencil skirt I just bought. I also started investigating the actress referenced as the original “Sweater Girl”, Lana Turner, after her debut role in 1937’s They Won’t Forget.

The retro sweater is very curvy, which can be attributed to the infamous bullet bra. No wonder people started referring to her as “Sweater Girl”.

I never knew much about Lana Turner’s career until I started investigating her on Wikipedia where it said she had a reputation as a “glamorous femme fatale”. This reputation was enhanced by her performance in the film The Postman Always Rings Twice (1946). Her acting career was a successful one, having been nominated for an Academy Award for Best Actress in the movie Peyton Place (1957).

3 thoughts on “The original "Sweater girl"”